Camp NaNoWriMo was finished at midnight on April 30. I danced dangerously close to that deadline when I finished my goal and validated my win. What a month it has been. Here’s what I’ve been up to while working on my Camp NaNoWriMo project for April 2018.

My project, as of yet, remains frustratingly unnamed. It’s a YA pirate novel lingering in the realms of fantasy. (This is my third pirate/seafaring people based novel that I’ve written)

“Given a second chance at a new life, Phoenix is enlisted by the navy to hunt the pirates wrecking havoc at Imperial ports, but word of mutiny and blackmail leave Phoenix wondering who really are the “Scourge of the Seas”. Pirate or Imperial?”

My goal for the project was to do 3600 minutes (60 hours) of work on it during April. This could include anything from brainstorming, to planning, to writing and everything in between.

The breakdown of that time spent looks something like this: 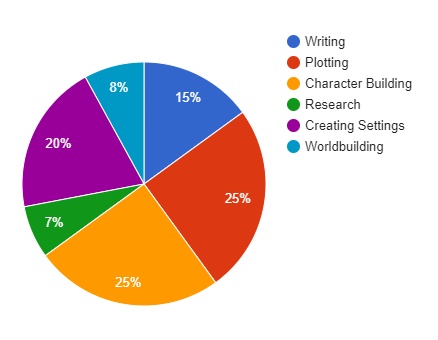 Writing: This was the actual writing that I got done on the novel. During Camp NaNoWriMo I wrote about 22,000 words in my novel. I was really surprised by this because it seemed most days that I only got a couple hundred words written.

Unfortunately, the scenes I have written do not go past the first plot point of the novel meaning the main conflict of the story has not yet happened in 22,000 words, which is not good. It is way too late in the novel for the main plotline to just be starting, but the story itself is enjoyable to read and write so changes will have to be made during editing to take out the unnecessary events and tighten the plot.

Plotting: I spent the first 15 hours or so of Camp NaNo working on fleshing out my plot. I knew the basic run of the story and how it ended, but how the story moved between events and how Phoenix ultimately becomes a pirate I hadn’t figured out, so I tried out different endings, different conflicts and different scenarios in order to find the plotline I eventually landed on and built my outline around. I knew some of the themes I wanted to build around and and some motifs I wanted to follow. During plotting, I figured some of these things out with more certainty.

Character Building: I had a lot of fun building characters this month. I thought I had Phoenix figured out, but as you can learn about here, I really didn’t have her figured out until I started writing about her.

Some of the other characters I got to build and develop were Phoenix’s closest friends. At the start, I just had a bunch of names of eventual Imperial crew mates. But I was reluctant to build any sort of in-depth characters for fear of falling in love with them because I know this story is the beginning or origin story for Phoenix the Pirate–not Phoenix the Imperial. She’s not going to stay with her Imperial friends for very long.

Of course though, I did fall in love with my group of Imperials and I am not excited to see the end of this novel play out when Phoenix leaves the crew she and I grew to love. My heart will break so many times.

Research: This part of my month was minimal, but necessary. I started reading a book about pirate myths and drew on the research I had done for a paper I had written about the Dutch Sea Beggars. If you put my book in the real world it would fall just before the the Golden Age of Piracy which happens between 1650-1730. I’m generally unaware of what the world was like then so there was some research into the technology and medicines of the time which helped to flesh out some of the world.

Creating Settings: If you couldn’t tell by the brightly coloured pie chart, I’m a visual learner. So part of the month was spent creating and drawing maps and settings for my world. I already had the world map, but I needed a map of the compound where Phoenix spends most of her time, so I drew it and then painted it as well as drawing a few of the specific buildings like the mess hall and barracks in order to help me visualize and create the space in my mind and thus in the book.

Worldbuilding: Normally I blitz through a first draft without stopping and use placeholders in order to remember to flesh out some part of my world later, in edits. But this month I took the time to stop writing in order to flesh out the world when I came to an idea or concept that I didn’t know.

I spent hours coming up with slang, creating constitutions, building cultural festivals, outlining the societal hierarchies, working out the finer details of a judicial system, and writing histories. Breathing in the world this way has allowed me to immerse myself in a new world which I’ve never written in.

These components split my time during Camp NaNoWriMo in a nice balance, and if I ever plan to do NaNoWriMo with a time-based goal rather than word count goal, I will likely approach it in a similar manner.

I loved this April. I loved my story, my characters, the process, and all the wonderful people who were in my camp cabin who encouraged and supported one another throughout the month. I can’t wait to keep working on my story, keep writing and planning and hopefully write with some of my cabin mates again.

How did your Camp NaNoWriMo go?

2 thoughts on “Reflecting on My April Camp NaNo Experience”